The first documented customer service complaint can be seen in the British museum. Some time around 1750 BC a customer named Nanni received a shipment of copper ore from Ea-nasir. But the quality of ore that was eventually received was inferior to what was expected and there had been some annoying delays in the supply. The complaint, inscribed on a clay tablet, describes how the customer’s expectations had not been met, the ore supplied was not what had been promised and that the customer had been treated with contempt. Unfortunately we don’t know how Nanni’s complaint was dealt with by the supplier, Ea-nasir.

While it’s interesting to see that people have responded angrily to poor customer service for millenia it’s perhaps more relevant to jump forward in time to examine how customer feedback has played a part in the development of our modern consumerist world. 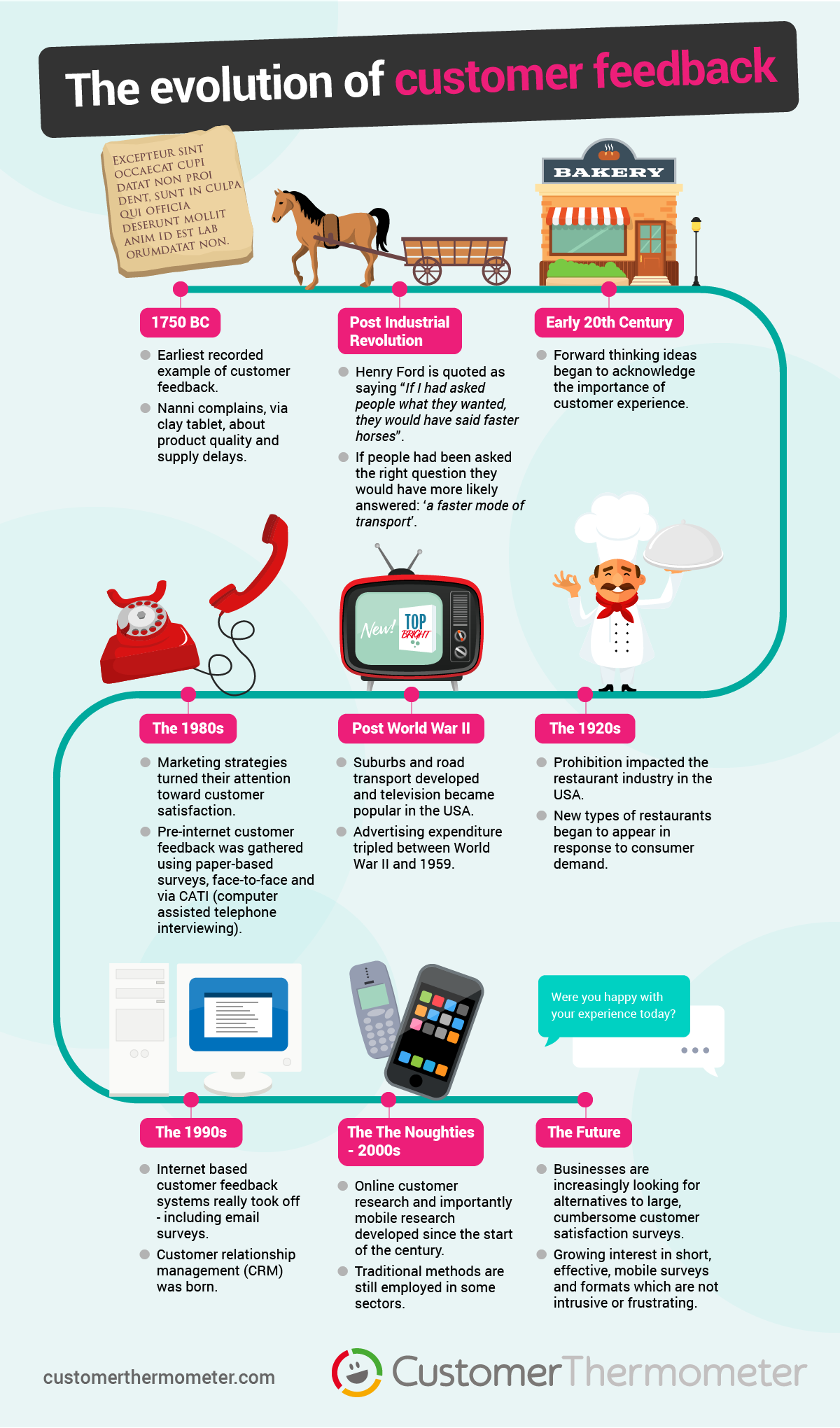 The real story of where we are today appears to have started at the end of the 19th century, after the industrial revolution. Living standards were generally improving for Americans due to technological and transportation innovations including the invention of the radio and the mass-production of automobiles.

The Model-T Ford, from Henry Ford’s innovative production line, transformed the way many Americans lived their lives. But Mr Ford is often quoted as having said: “If I had asked people what they wanted, they would have said faster horses”. Some people look at this quote as proof that true innovation is achieved without customer feedback. But the fact is that if customers had been asked the right question regarding what they wanted and needed they would have most likely answered: “a faster mode of transport”. This desire was clearly understood by the Ford motor company, driving the development of the internal combustion engine and affordable motor transport.

The early 20th century saw the distribution of Sears catalogues to people in small American towns and the development of installment buying. Around 3.8 million catalogues were distributed in 1908.

New ideas for customer service meant that consumers could visit multiple stores or look at the Sears catalogue and have their chosen goods delivered, for free. They could then decide which they wanted to keep and return the others. These free deliveries and returns were part of a significant developmental change in the way that customers were being dealt with. Consumers began to be treated as guests by the various stores who were competing to make their shopping experiences more enjoyable.

Hotels and restaurants, at this time, picked up on these forward-thinking ideas. The importance of customer-experience was being acknowledged and steps were being taken to provide exactly what customers wanted.

Another example of where consumer demand transformed an industry is the development of affordable restaurants in the USA. Before World War I restaurant customers tended to be upper-class and all male. During the 1920s the number of restaurants in America tripled, although prohibition had dealt a death-blow to French cuisine due to the need for wine. Lunch breaks from work had grown shorter and the populations of cities had massively expanded. A new type of restaurant appeared in response to consumer demand, called the lunch counter, serving hot food quickly. But American customer feedback showed a developing desire for lower prices and even faster food.

Self-service restaurants became popular but their popularity waned in the 1920s as people wanted lighter, healthier meals rather than heavy, hot lunches. Understanding and responding to the changing demands of restaurant customers was important for survival in the competitive prohibition era.

In post World War II America there was an explosion in the development of suburbs and the transportation systems, roads and automobiles necessary to support them. Television became increasingly influential, shopping malls were constructed and advertising exploded. It was during the 1950s that the foundations of modern advertising agencies were laid. Advertising expenditure tripled between World War II and 1959.

Up to around the start of the 1980s customer feedback tended to be collected informally, perhaps by directly asking customers if they were happy, or by routine annual surveys. Up to now most brands were not customer-focused, they were product-focused. The 1970s had enabled some larger organisations to make use of mainframe computer systems which ultimately led to the development of database marketing in around 1982.

It was during the 1980s, when retailers and producers were matching one anothers products, that marketing strategies turned their attention to customer satisfaction. Deriving valuable and representative customer feedback from a large enough sample of customers was necessary in order to evaluate these strategies. Paper-based and face-to-face customer feedback survey techniques tended to be employed in these pre-internet days.

In the late 1980s and early 1990s customer surveys began using Computer Assisted Telephone Interviewing (CATI). This is a survey technique wherein an interviewer follows a defined script enabling responses to be collected and entered in real time and scripts to automatically change based upon entered responses.

The 1990s was the decade during which internet-based customer feedback systems really developed. While there had been some experiments with fax and disk-by-mail surveys for B2B in the early years of the decade, it was later in this period that B2B research shifted to use email. Direct consumer research became primarily web-based during this decade. This was also the era during which customer relationship management (CRM) took off, with the first system developed by Siebel Systems in 1993.

Online research and, increasingly, mobile research have really taken off since the start of the millenium. But customer feedback is still gathered using traditional methods such as face-to-face interviews, paper-based surveys and telephone surveys, especially in some less-developed markets.

The Future for Customer Feedback

In recent years there have been significant changes in the realms of customer satisfaction assessment and gathering customer feedback. Businesses are increasingly looking for alternatives to large, cumbersome customer satisfaction studies. There is growing interest in shorter mobile surveys, deriving intelligence from social media monitoring and survey formats which are not experienced as intrusive or frustrating by customers.

Try the future of customer feedback for yourself, send yourself an example 1-click feedback survey from Customer Thermometer: