Putting the boot into online surveys

The humble online survey came under intense scrutiny from an unexpected source earlier this month when a top English Premier League team asked fans to rate the performance of its manager.

Everton Football Club is not unusual in periodically asking its customers questions via online surveys.

With global audiences running into the hundreds of millions for some EPL matches, soccer clubs like Everton run large marketing departments and attract major sponsorships.

And with tickets costing, on average, more than £30 ($42) a game, fans understandably feel financially invested in their clubs as well as emotionally attached. Hence, charting CSAT levels and gaining insights is very important.

So why has ‘survey-gate’ attracted so much attention across the UK’s sports pages?

First and foremost, it’s because this particular survey question focused on an individual. The offending question invites respondents to affirm the following statement on a scale of 0-10:

I have a high level of trust in the current manager and coaching staff of Everton e.g. in making the right decisions to get the most out of the team.

Asking about the performance of individuals is absolutely relevant and appropriate, and companies use online surveys to do this all the time. For example, in relation to support desk queries or other transactions.

Three factors in particular appear to have complicated this case:

There are over 100 professional football/soccer clubs in the UK, and thousands more around the world.

The idea that nobody has ever before asked fans how they rate their manager, is fanciful. In fact, Everton asked the exact same question about their former manager, the previous season.

But, for whatever reason, Allardyce didn’t take this on the chin. Perhaps because he wasn’t aware of it before he read about it in the newspapers and was asked a raft of questions at the next Everton pre-match press conference. 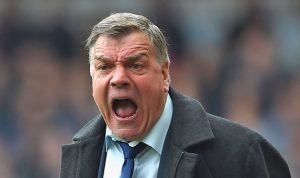 The man, quite literally, in question

With cameras rolling and microphones waving perilously close to his trademark scowl, Big Sam’s reaction to the online survey was somewhat predictable.

According to him it was a “big mistake” and not the kind of thing professional football clubs should do. Everton’s chairman has since publicly apologised, while its marketing director was (metaphorically) thrown under a bus and accused of “not understanding how football works”.

The Customer Thermometer view on this is that organisations should be wary of curtailing their appetite for asking customers questions.

It surely can’t be a mistake to understand the perspective of important stakeholders, and facilitate a way of capturing those insights through an online survey. What did seem to go wrong was failing to be sensitive to the individuals concerned, before customers were asked for their opinion of them.

Episodes like ‘survey-gate’ must not discourage organisations from asking searching and difficult questions to get at the truth. Even if that involves individuals who might feel uncomfortable about having their personal performance put under the spotlight.

In the case of Allardyce and Everton, there is an argument for increasing the frequency of these kinds of questions rather than choosing to stop asking them. This could inform trends over time, and help to refine questions to get at pressing issues and potential improvements.

Amid the media scrum around the manager’s fury and disappointment, no-one seems to have considered how the customers (fans) feel about the treatment of their opinions in this sorry affair.

Customers need to be listened to, even if the truth is tough to hear.

Embracing the conversation is the best way to prevent it being awkward.

Looking for a better way to get feedback from your customers?

Give Customer Thermometer a go. It’s simple, quick, and you can add it to emails you’re already sending your customers.

Get a free trial now…

How to get customers to take surveys

How The 20 uses Customer Thermometer to help MSPs reach their ultimate growth...
Scroll to top