Emojis have been mainstream for over 10 years. Can you remember a time before emojis? They used to only be in messages, then they grew to social media posts and feedback buttons. Now they are so ubiquitous, you might not consciously notice them.

Here at Customer Thermometer, emoji, emoticons, icons and feedback symbols are our business. We pride ourselves on being the ‘Instagram of feedback’ – our survey software enables businesses to embed emoji into emails, so customers or employees can easily click on the icon that suits their mood. They are going down a storm, but we know that the usage of emoji in businesses is still relatively new.

We wanted to take a look at emoji use in business and how they should be used going forward. Despite their controversy, they’re a powerful communication tool and have opened up a range of opportunities.

The first ‘emojis’ date back over 130 years when Puck Magazine published 4 facial expressions made from typewriter punctuation symbols. A century later, Dingbats (typesetting glyphs) and other icons were incorporated into computer language. Shortly after, so were emoticons, the precursors to today’s emojis.

Emoji as we know them got their official start in Japan in 1999 via a local artist, Shigetaka Kurita, who wanted a simple way to convey information on the mobile platform. This is why the word “emoji” is translated to “image character” in Japanese.

Fast forward to today and you’d be hard-pressed to find a post on your social media feeds that isn’t full of different types of emojis.

No wonder Oxford Dictionaries named U+1F602 Face With Tears of Joy as its 2015 Word of the Year! The options are constantly expanding; over 200 new emojis are being released annually on the iPhone. 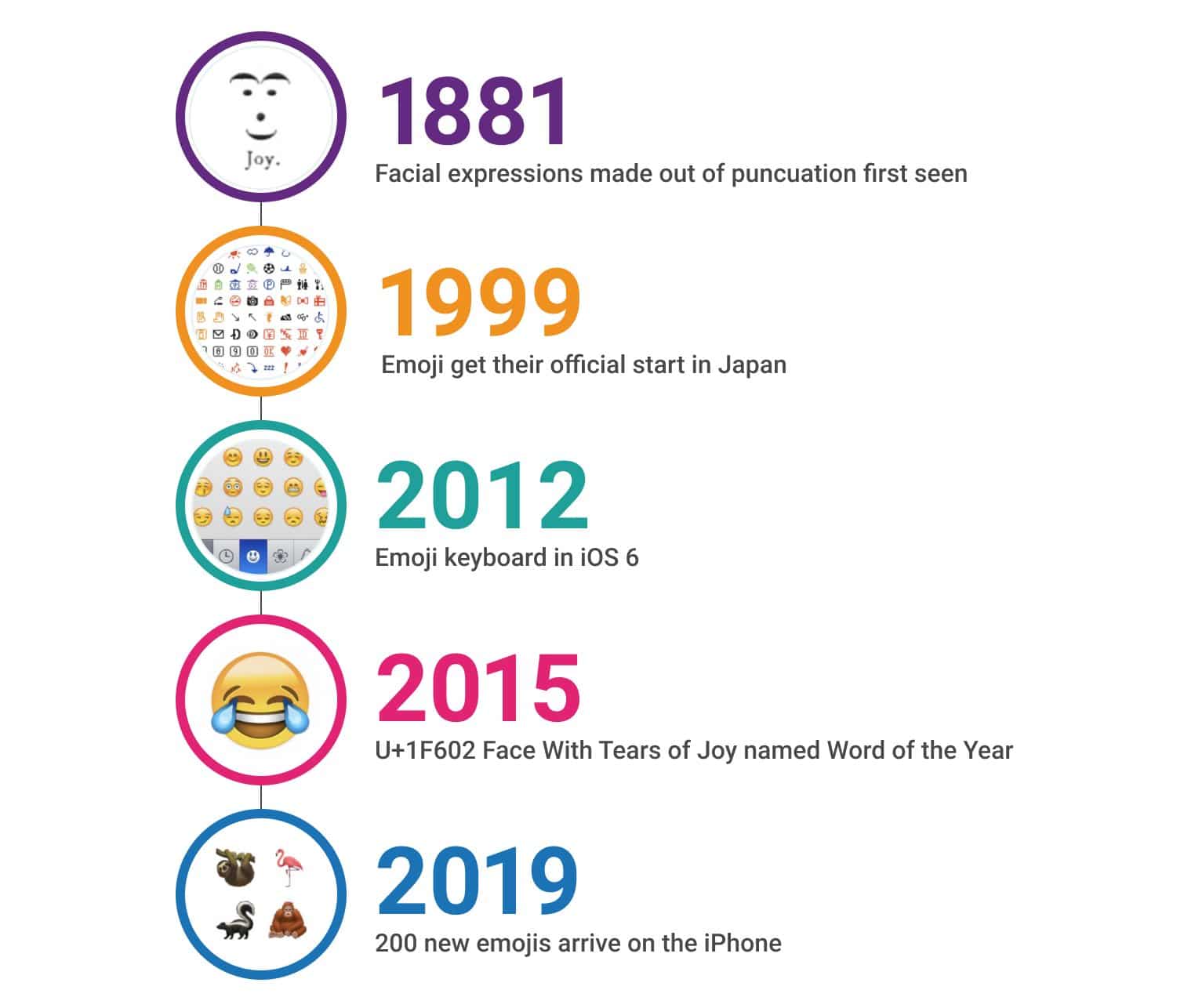 Also proving popular is emoji use in business messaging platforms – over 26 million custom emojis have been created in Slack since the feature was introduced and for the 13 million daily active users of Microsoft Corp.’s Teams, emoji use is basically universal. Of course, we are finding them very effective as a way to quickly and easily see how customers and staff are feeling…

Emojis are used in surveys for 3 purposes:

Benefits of creating an emoji survey

Why should you consider using emoji surveys? Well, there are numerous reasons. Here are just a few:

Emojis are fantastically popular for feedback

According to Emojipedia, more than 1 in 5 tweets now includes an emoji. Literally billions are used every day on every communications platform. Increasingly, emojis are used as icons in place of text-based feedback options. For example, in social media, where users of Facebook, LinkedIn, Snapchat select from a subset of emoji options to express a reaction. And on below-the-line comments and reviews, thumbs up/down emojis help grade responses.

A picture is worth a thousand words. The beauty of emojis is that they convey meaning regardless of language. Everyone understands the difference between a smiley face and a frown face. Also, emojis are used by people of all ages. And because of their extreme popularity among the young, this will only increase as a proportion of all users. With 75% of the workforce forecasted to be millennials by 2025, there is a clear need to adapt to more digital sensibilities. Lastly, because emojis are so common, they are readily used in B2B communications; not just B2C.

Emoji surveys are faster to complete

The human brain is wired for images. Certainly more so than for words.

Around 60% of the entire brain is involved in visual processing! The iconography of likes and dislikes is a fundamental aspect of ratings and reviews.

This enables customers to efficiently communicate their thoughts. Emojis makes the range of responses more nuanced – rather than just ‘good’ or ‘bad’. This is all really important because survey response rates rely on making life easy for respondents. Emoji surveys require the least possible effort.

Stange et al (2016) studied visual processing of smiley face scales in web surveys. They found that respondents processed the images of faces differently from that of the text. In other words, they spent less time “fixating” on both the question and the text response options “when the smiley faces appeared alongside”. This efficient way of processing faces is beneficial for surveys. Both in the way questions can be asked, and with the options for answering being far more digestible.

“Nine out of 10 emoji users agree that the icons make it easier to express themselves. In fact, more than half of emoji users are more comfortable expressing their emotions through an emoji than via the telephone or an in-person conversation.”

How to use emojis in business

Ultimately, emojis are symbols that convey more than words. They help the writer quickly express an emotion, tone and feeling. So embrace how customers want to communicate, and also consider the benefits of extending emoji usage into employee engagement too. Here are some emoji tips: 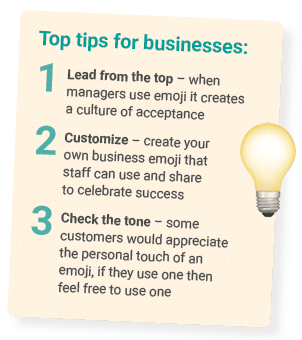 Ultimately, emoji are symbols that convey more than words, they help the writer quickly and simply express an emotion, tone and feeling. It’s time we embrace how workers want to communicate, across email and collaboration tools like Slack and Teams, and also consider that the brevity and humanity benefits of emoji usage can also be extended into customer engagement as well.

Businesses already recognize that customers engage better with content when they use emoji, so it clearly stands to reason that this successful way of communicating should also be applied to customers.

After all, there is a clear link between how employees are treated within an organization and customer retention. 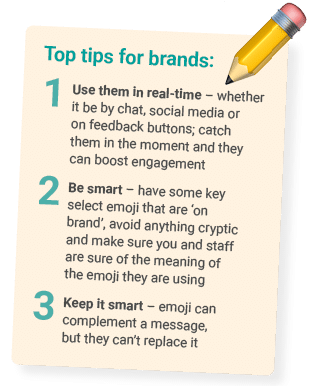 In marketing there’s a clear correlation: emojis = engagement. Emails with an emoji in the subject line have better click-throughs, social media posts that have images have more responses.

Words alone don’t cut it anymore as they don’t reflect the language changes of customers. The key now is to make sure you are matching the right symbols and pictures that support your content and tone. These emotional icons really do have the power to break down barriers; by engaging with your target market in the way they communicate you can truly humanize your brand and show your customers you aren’t afraid to speak to them on a more personal level.

How are major brands incorporating emoji into how they interact with their audience, and how effective is it? We’ve taken a look at some big names to see how they’re using them for a little bit of inspiration.

In this example, Walmart use emoji in a fun and casual way – there’s not a need to upsell or link to products – the brand is large enough that they can easily opt to use its personality to keep the company in people’s minds.

Although this might not be a luxury that all company social media accounts can afford, there’s something to be said for the softer approach in branding when it comes to sales and online content. 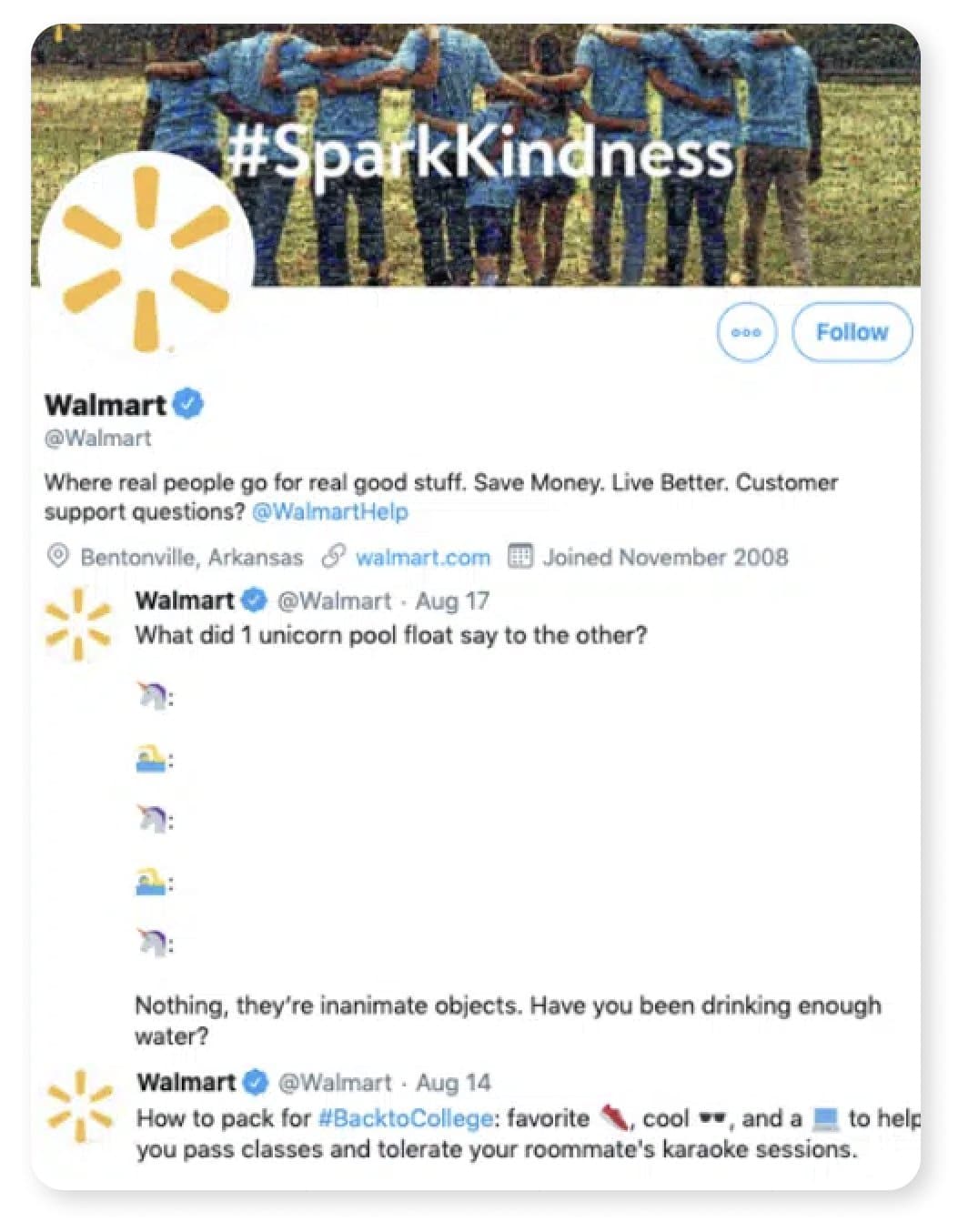 McDonald’s again take a playful and quite liberal approach with emoji usage – the resulting timeline is a very colourful affair.

All tweets and their emoji relate back to the company itself, establishing ‘in-jokes’ with customers. 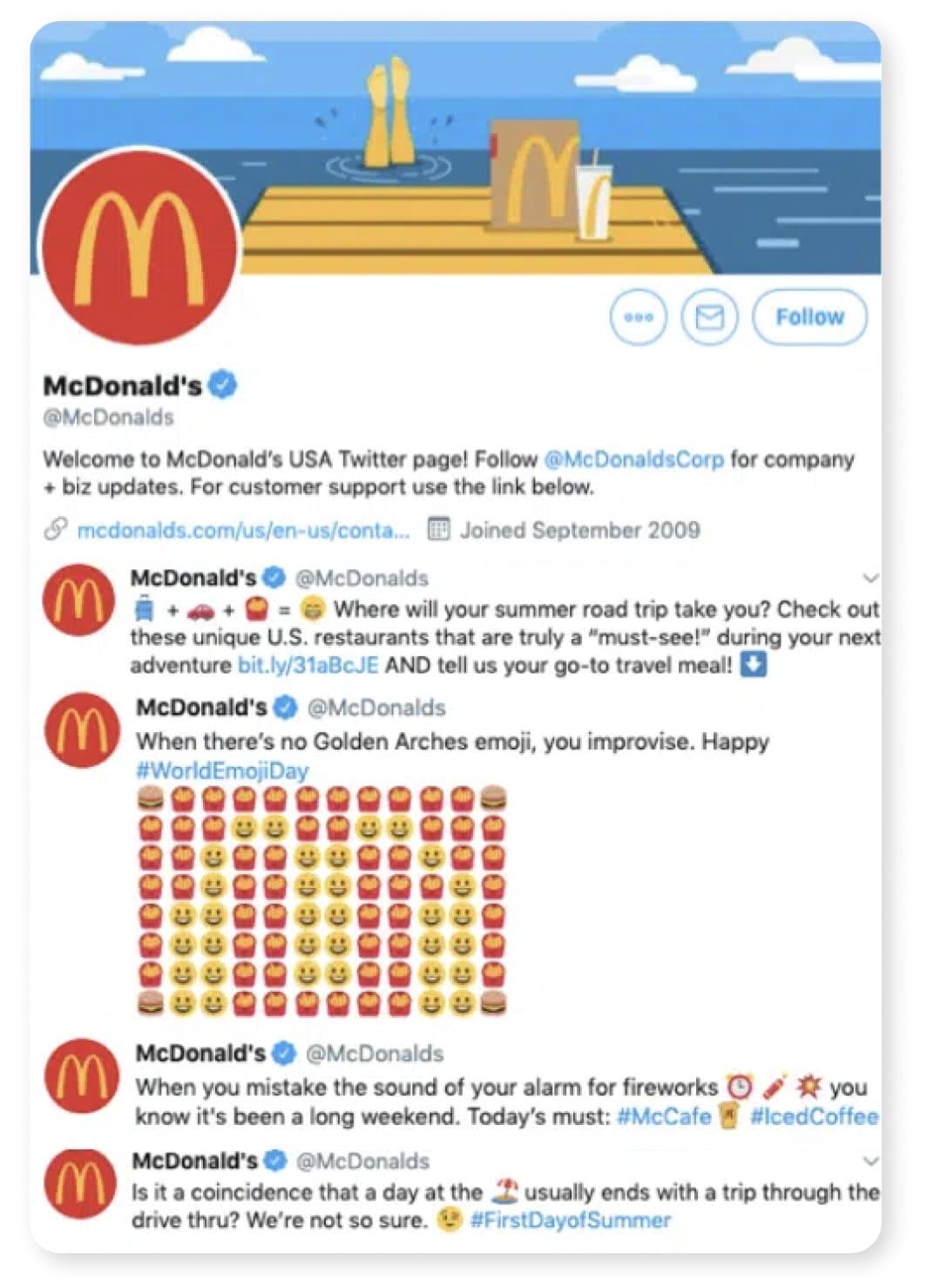 The official Apple support Twitter account uses emoji a little more sparingly, opting for their use as an illustration at the end of a sentence to add emphasis.

It’s highly unsurprising that Apple would make use of emoji, what with having their own design of them, but as this is a technical support account it’s interesting to see that they also use them in a more formal context, offering regular tips and tricks for their followers. 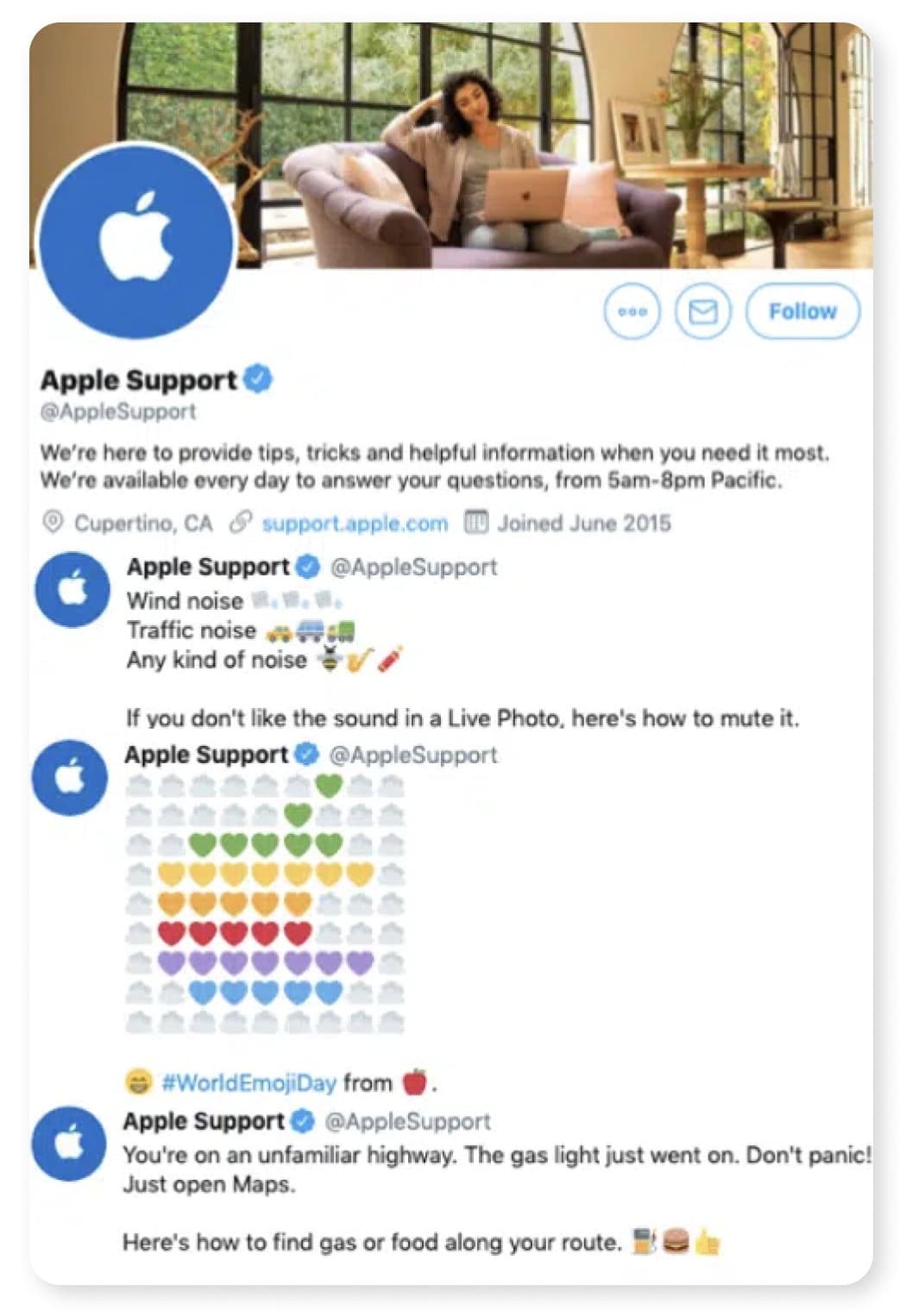 Glossier take a friendly, laidback approach, as is common of their branding overall. Again, they don’t need to always push their products, with occasional references but largely a conversational approach.

Emoji frame sentences and draw the eye, which is helpful when considering tweet placement amongst a busy Twitter feed. 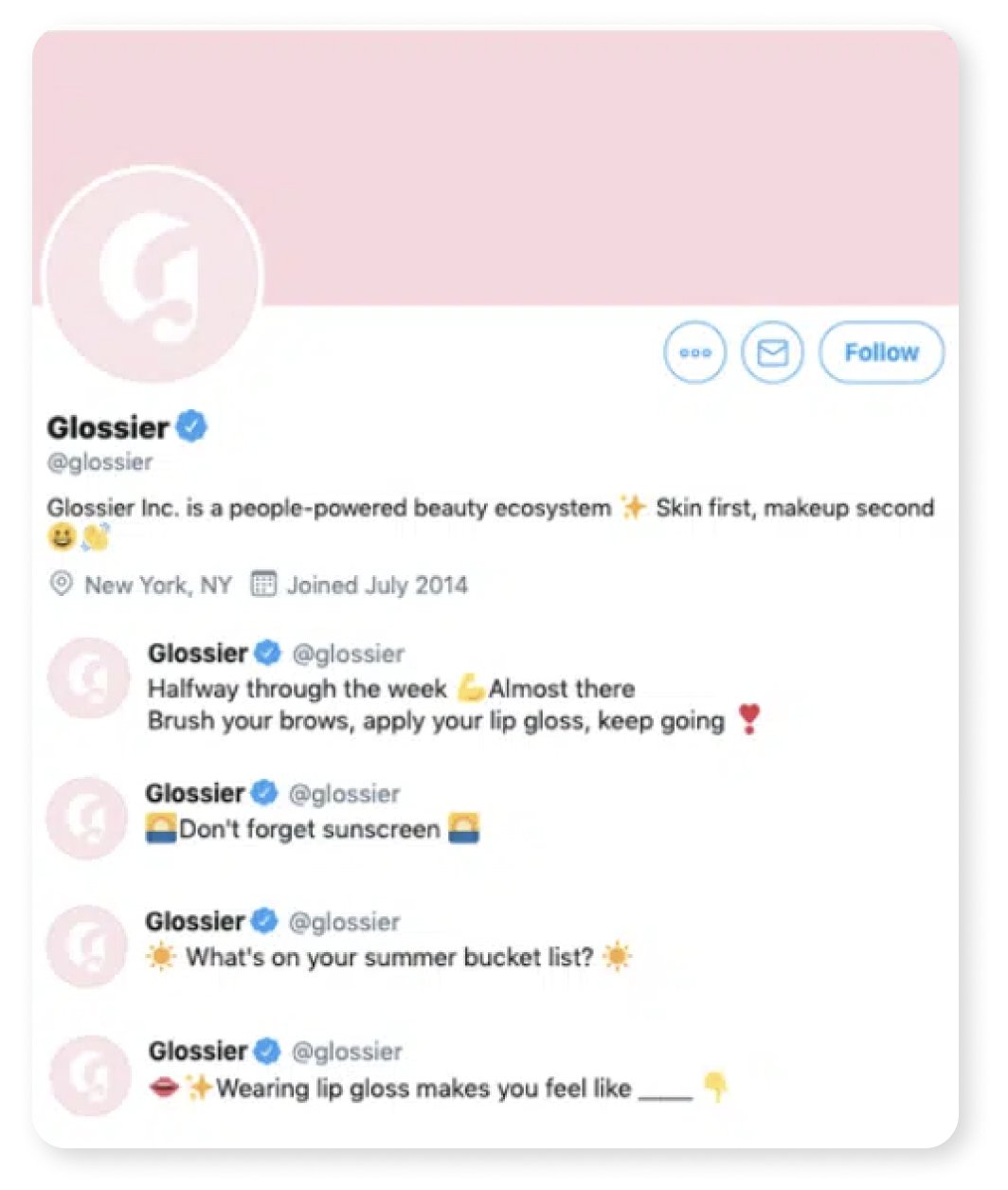 Research on Emoji use

At Customer Thermometer, we know organizations are increasingly using custom emojis in their surveys. We also see this as part of a wider trend toward the ‘emojification’ of business communications.

So, we commissioned original research, across 1,000 Americans, representing all ages and states, to give us brand new insight into how emoji are changing business communications.

For the best advice on creating your own smiley face feedback surveys, check out our templates! Or get a free account and start creating an emoji survey today.

There’s a lot of literature available to help navigate the uncertain territory of professional emoji usage. We’ve gathered 6 of our favourite books for you here.