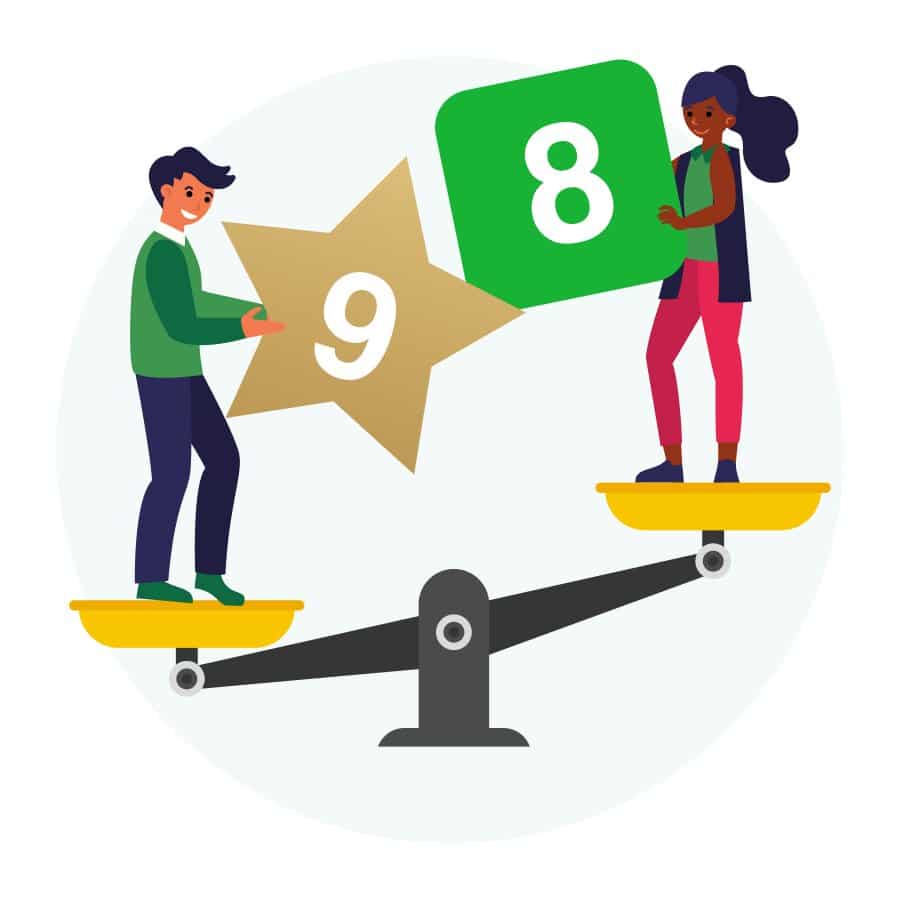 This section of the NPS guide is all about understanding what your NPS score means in a wider context. For example, stacking up NPS scores against market norms and industry averages.

Benchmarking is really valuable when devising goals for your NPS strategy. The same goes for checking you’re on the right track as you go along.

If you’re almost ready to go, test a few NPS survey ideas out for free via the Customer Thermometer trial.

Set Up Your NPS Survey Today Create a free Customer Thermometer account (No credit card required – Fully functional account). Set up an NPS survey and discover why over 10,000 teams choose CT to track, measure and improve their NPS program.

NPS is the abbreviation for ‘Net Promoter Score®’. It’s designed to measure the overall loyalty your customer has to your brand. In other words, a customer loyalty metric. Businesses around the world use NPS. It’s based on asking as many customers as possible the same question:

On a scale of 0-10, how likely are you to recommend X (to a friend or colleague)?

Responses to this question – or variations of it – are used to formulate a single running score. This score evolves each time a new response is received.

First and foremost, your target should be higher than it currently is! Just like any other KPI, when using NPS it pays to aim high. As we’ve established in how to calculate your NPS score, +100 is the ultimate goal but anything over zero shows you have more promoters than detractors.

Set your benchmark in the context of your industry sector. Some providers aggregate NPS scores across industries to help companies benchmark themselves. At the top end are department and specialty stores, while down at the bottom are cable/satellite TV and ISPs.

Here is a select list based on the latest Satmetrix NPS benchmark data. It shows the average NPS scores for a series of sectors plus who has the best in each.

Industries like shipping, cell phone service and health insurance have relatively low variance between the average and what the best companies achieve. If you’re in an industry like this, it’s realistic to assume your target should begin within that range. In other industries like airlines, the sky is (quite literally) the limit. Here, an average NPS of 27 is nothing spectacular, but Southwest Airlines’ ability to reach 71 shows what can be achieved.

There are a number of factors that affect NPS benchmarks. This is obvious but often overlooked. Make sure you take these factors into account when benchmarking your NPS scores.

Is the business or product largely commodity-driven or service-driven

Emotional perception of the importance of company and/or product

Regularity of interaction with the brand or company

the more regularly you interact with something the more you can take it for granted; the familiarity breeds contempt argument

Some studies, including one by the Harvard Business Review, have shown that gender can affect NPS score. Thus if you’re looking at benchmarks in a heavily gender-skewed market, this could be a factor

Is it time to start improving NPS scores?

Significant NPS improvements seldom happen overnight. You have to convince significantly more people to score you higher on the NPS rating, and not be replaced by others scoring you lower! Expectations for improvement also depend on what your target is. Are you going for a total turnaround from poor NPS to great NPS? If so, this takes time and it would be reasonable to commit a long-term focus over many months. However, smaller and more incremental change can be witnessed in more frequent intervals – even in real-time. To do this right you have to be collecting NPS feedback constantly.

The size of your customer base could influence timescales too, as could the frequency in which you interact with customers. A B2B company with only 40 customers could focus on them intensively in order to move NPS into the target zone. But if that company’s business is hosting annual corporate events, the touchpoints for influencing those NPS scores is drawn out over a much longer period.

NPS improvements don’t necessarily have to cost a lot. Sometimes it’s the little things. Personalization, a little extra care and compassion. Reducing friction and delay in the customer journey. If you budget your NPS improvement plan you can more easily calculate ROI and payback periods.

What is a good NPS score using benchmarks?

The definition of a good NPS score differs according to industry. But, in general terms, anything over zero reflects that there are more people prepared to recommend you than not.

Even if your score is +99, you’ll want to improve it or at least keep it the same. But you can’t do that until you’ve got your first baseline reading. No matter how you think you’re doing with customers, you won’t know without measuring it. You might be surprised, one way or another. The first data should also kickstart targeted activities to improve NPS score over time.

Remember that NPS scoring changes are wholly influenced by shifting customers between the 3 groupings: promoter, passive and detractor.

Nudging passives to become promoters will up your NPS score, as will shifting detractors to become passives. Do this by learning from extra feedback you can get from individuals as part of the NPS process. Ask those who aren’t yet promoters camp what would make them increase what they rate you.  For those who are promoters, uncover what you’ve done to make them so happy, and do more of it!

Download our best-practice NPS response planner for help on how to do this.

What is a bad NPS score using benchmarks?

Determining whether you have a bad NPS score depends on your context and perspective – at least up to a point. A stone-cold -50 or lower is pretty hard to argue against as a poor rating signifying plenty of room for improvement.

However, it’s important to recognize that NPS scores of organizations within the same industry are somewhat relative. If +20 is very high for a market like cable TV, then a score of -5 perhaps isn’t so bad. Likewise, if +40 is considered average for your niche of e-commerce retailer then consider being alarmed if you only register +5.

The line you ideally never want to cross is the zero line.  Any negative NPS score shows that detractors outweigh promoters. That’s more people with the potential to actively say bad things about you to others than people who’d say the opposite.

You can start turning around this situation very quickly, by finding out why customers give you negative scores. Use an NPS measurement system to drill down into the drivers – be they product quality, service speed, location, or the attitude of customer agents. You can elicit comments – even whole stories – or simply ask customers to pick from a range of options. Once you know that, you can start fixing it.

Improve your NPS score by benchmarking

The simple answer to improving NPS is by improving the customer experience factors that influence NPS. There tends to be a causal link between customers’ expectations being met or exceeded and good NPS scores.

NPS improvement hinges on the concept of taking action, not simply measuring NPS for the sake of it. If you aren’t going to take action, there is no point in collecting NPS data.

Most organizations orchestrate their NPS action plans according to the 3 NPS groupings. This means a plan for promoters, a plan for passives and a plan for detractors. The most crucial of these is detractors because, otherwise, they risk damaging your brand. If you do nothing else, have a plan for your detractor’s cohort.